Day 1: Eating and Not Getting Hit By Cars

I’m finally here!!  My first day in Taipei was spent eating and not getting hit by cars, not necessarily in that order.

I arrived in Taiwan safely and without too much fuss.  It was 19 hours total travel time, one layover in Anchorage, Alaska, and several hours spent sleeping, thanks to a potent combination of sleep deprivation prior to the trip, a double vodka tonic served up by a bartender in New York (that tasted like rubbing alcohol), and some NyQuil (taken after the layover, NOT with the cocktail, don’t worry). I was met by a friendly woman who works for the Foundation for Scholarly Exchange (Fulbright Taiwan), who made me feel very welcome and helped me check in to the hotel.

Breakfast in the room: carob covered rice cake from Sag Harbor, apple pear from the hotel, water, tea, and books.

I didn’t feel too jetlagged, so after securing some WiFi and checking in with my family via Skype, I decided to take to the Taipei streets and seek out some lunch and temporary groceries, like fruit or snacks, to keep me on the right side of hunger and foreign-country-distress. 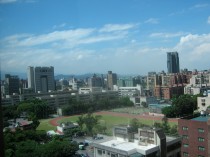 I scouted my walking route around the “Da An” district of Taipei (大安) using Lonely Planet Taiwan, the enormous Taipei tourist map from Fulbright Taiwan, and Google Maps.  I decided to head to a restaurant called “Sweet Dynasty” and then to an organic grocery market called “Santa Cruz,” and see what I could find along the way.

This went well until I left the hotel and was struck by 2 things: the intense humidity of the climate here, and the fact that I was almost hit by a moving vehicle… on my WAY to the intersection.  On my way to lunch, I was almost hit by, and summarily avoided:

– An older man on a brown, rusty old bicycle, who teetered up behind me as I stepped towards the intersection (still on sidewalk at this point)

– A scooter driving towards me (on the sidewalk!)

– Cars, at a rotary with “crosswalk” (should be re-named cross-run?)

– And, most embarrassingly, a guy with a hand truck stacked high with cardboard boxes, and I didn’t see him because I was taking a picture of the Taipei 101 building and the skyline at the rotary.

The product of my high-risk attempt at photography.

I think I needed a neon vest that read (in both English and Chinese), “Fragile. Jet lagged and slow to dodge. Treat carefully.”

Then I found the restaurant, which was brightly lit, and full of Taiwanese folks on social and business lunches. The menu was mostly bilingual, and although the “lunch specials” were only in Chinese, I could easily spot two of my favorite NYC Chinatown staples: won ton soup, and fried turnip cake.  And I ordered them in Chinese!… sort of. (“this one, and that one… is that how much/enough?”)

It was the perfect way to get settled: have some comfort food and sit down in a restaurant with a book, after a long plane ride and some edible but not particularly satisfying airplane meals and snacks.  The won ton soup was beautiful– it had tender shrimp-filled won tons in perfectly thin skins, silky egg noodles, and fresh baby bok choy.  And the turnip cake was tasty– not as greasy as the ones I’ve had in the US, and the shreds of turnip in it actually tasted sweet.

The place is called Sweet Dynasty because it specializes in dessert, according to Lonely Planet. And on my place mat, I read the restaurant’s endorsement for “Tong Shui,” a sweet, custardy dessert soup with many flavors and add-ins. They promised it would “nourish your body, regulate your temperature, promote metabolism, and strengthen health.” I haven’t heard that many promises since the last time I saw a late-night Informercial, so I decided to ask the waitress for a recommendation. (“which one do you like?”) 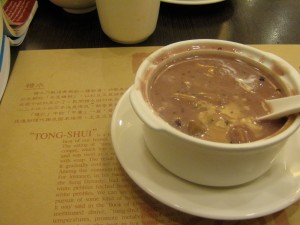 She pointed me towards a red bean, taro, and coconut milk soup, which eagerly ordered– I’m a big fan of red bean flavor. The taro was in starchy blocks, like potato in New England clam chowder, and the beans were all crushed up, but the soup was creamy and just sweet enough without being cloying. And as I ate, the flavors and gentle warmth of it grew on me– I couldn’t stop eating it!  I finished and managed to ask for my bill and the directions of the restrooms in Chinese. Whew. I can already feel the medicinal effects of the Tong Shui– my jet lag is quickly being replaced by a sense of mastery over my surroundings!

And then I stepped out onto the sidewalk and was almost hit by another scooter.

Thanks to everyone for your well wishes in getting me here!  More coming soon, on Travel Fashion, neighborhoods in Taipei, and going to my first Night Market.

I had dinner in my hotel room with the fruits of discoveries: meat & vegetable bao, kimchi, salted duck eggs, with egg custard and pineapple for dessert. Yum!

My view is also quite nice at night. Very "Lost in Translation," I think.

6 responses to “Day 1: Eating and Not Getting Hit By Cars”